Hello, Kyra here! This is Onamae wa? #40, our weekly encounter where we pick Anime character’s names and look for anything interesting in them.

Our guest today is 小鳥遊(takanashi) ひかり(hikari), protagonist of Demi-chan wa Kataritai, a school setting comedy Anime currently airing in Winter 2017. Nothing to spoil here, but only Episode 1 and 2 were considered for this post.

Demi-chan wa Kataritai is a story about a world where demi-human beings have been accepted in our society. 小鳥遊(takanashi) ひかり(hikari) is a vampire, one type of demi-human. Energetic, laidback and moodmaker, Hikari-chan is surprisingly solid mix of cuteness and sharpness. Let’s check her name out!

小鳥遊(takanashi) is very famous among Japanese Names, although in practice it is rarely used. Back in 2014 there was a survey (link here, Japanese only) among a few hundred people in Japan asking about names that were stylish but hard to read without prior knowledge and 小鳥遊(takanashi) came first with a whooping 40.6%. Why? First let’s go through each Kanji.

小 conveys the idea of diminutive size as in 小さい(chii.sai; small) or 小説(shou.setsu; novel, short story). It was explored here many times, lastly being 小原(o.hara) 鞠莉(ma.ri) from Love Live! Sunshine in [Onamae wa? #24].

鳥 is a kanji present in many common words like 鳥(tori; bird) or 焼き鳥(ya.ki.to.ri; chicken meat grilled in skewers. YUMMY). We saw it first in 小鳥(ko.tori) 飯田(ii.da) from Amaama to Inazuma in [Onamae wa? #16]. It also appears in 鳥居(tori.i), a traditional Japanese type of gate mostly found at the entrance of Shinto Shrines.

Another interesting use is in the expression 一石二鳥(is.seki.ni.chou), meaning ‘killing two birds with a single stone’. I bet you have something similar in your country, right? In my native language we would say ‘killing two rabbits with a single staff strike’ and I just realized that it would be indeed an amazing feat!

Lastly, 遊 denotes ‘playing’, as in 遊園地(yuu.en.chi; amusement park) and 遊ぶ(aso.bu; to play, to have a good time). Quite often you hear in Anime someone demanding ‘asobouyo!’. In Gochiusa S2 (around Ep10 iirc) there is this scene when Cocoa yells ASOBOU! countless times. Keep in mind that this verb is also frequently used to invite a partner to ‘have a good time’ in an… uh… adult way.

Alright, back to 小鳥遊(takanashi). This is [Onamae wa? #40] , so by now you are already aware that many names don’t really follow the usual readings for their kanji. Still, they most likely follow readings that, albeit exclusive for naming purposes, exist. In 小鳥遊(takanashi) though, even that is not the case. There is no such reading as Takanashi for this kanji combination. So what is going on here?

If we try to literally understand 小鳥遊, it would be 小鳥(ko.tori; little bird) + 遊ぶ(aso.bu; playing), dropping the final ぶ, a common act when naming. So this name means “little bird playing”. Now here comes the magic. ‘Takanashi’ usually is written as 高梨(taka.nashi; tall pear tree), but it could also be understood as 鷹無し(taka.nashi), meaning ‘No Hawks’. Yes. Exactly. It is precisely what you are thinking. When there are no Hawks, little birds play. Isn’t this fantastic?

This idea ties well into Hikari-chan personality of being playful, especially when no one is looking, as in that scene when she faked biting Takahashi-sensei on Episode 1; or hugging Yuki-chan and poking Machi’s boobs on Episode 2. 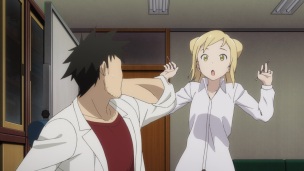 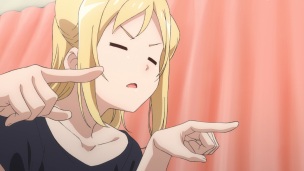 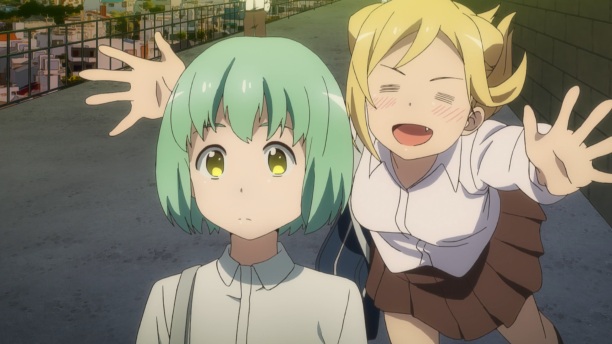 At first I was excited to cover this name because of how incredible it is by itself, but really glad that it turned out to fit our lovely vampire so well. 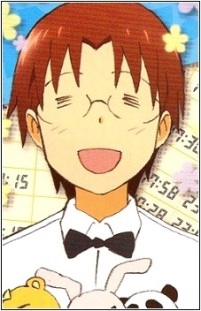 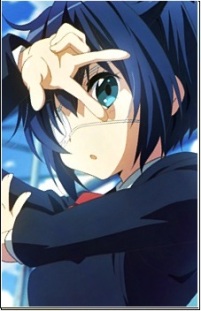 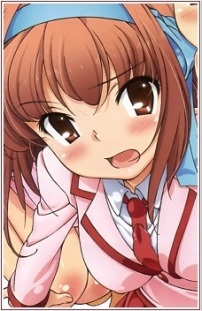 Although her given name is written in hiragana as ひかり, it is obvious to link it to 光(hikari; light). This kanji is present in words that describe things that our little vampire isn’t very fond of, as 陽光(you.kou; sunshine) and 光明(kou.myou; bright light). Still, it is symbolic attached to her bright personality and also carries noble ideas like glory, honor and hope. Her sister is named ひまり(himari), which sounds similar to Hikari but I couldn’t find any other way to create a relation, sadly. 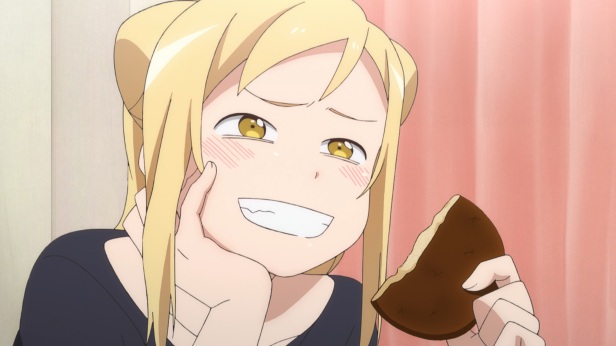 小鳥遊(takanashi) ひかり(hikari), the energetic and brightful vampire who likes to play around, especially when no ones is looking!

Edsamac from Anime & Anime did a very succinct initial impression of Demi-chan and other shows in his post Winter 2017 Initial Impressions.

Oigakkosan from RABUJOI is reviewing the show, so you may want to check his posts if you are still unsure on whether you should watch this or not.

Thanks for your time, hope you guys enjoyed your reading. I didn’t know what to expect from this anime, but it turned out to be really entertaining, mostly because Hikari-chan is an adorable moodmaker. There is also this calm and intriguing feeling about it featuring a society that doesn’t really discriminate those who are different. See you all next weekend!